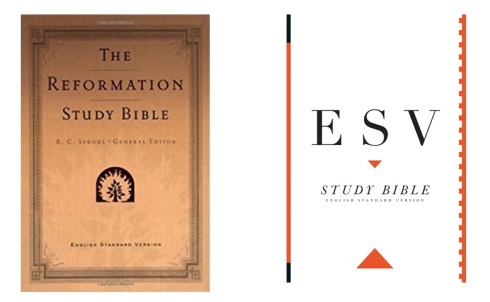 A good study Bible can be a great blessing for one’s personal devotions. For a couple of years, I used a Bible without any notes and, while it was still edifying, there were many times where a passage would raise questions. Of course, it’s not that difficult for me to pull a commentary off the shelf to explore possible answers, but it’s far easier to have a good set of notes immediately at hand in your Bible. This is all the more true if you don’t have a sizeable collection of commentaries like most pastors do.

Let’s begin with the “bread and butter” of a study Bible. Both the ESV Study Bible (ESB) and The Reformation Study Bible (RSB) contain extensive notes throughout both the Old and New Testament. However, the ESB is far more comprehensive in its notes. As an example, take Psalm 62:11, “Once God has spoken; twice I have heard this…” RSB offers nothing to explain this expression, but ESB notes, “To say once…twice is to indicate that the idea is sure, namely that to God belong both power (by which he can carry out his will; contrast v.9) and steadfast love (in which he has pledged himself to the faithful, and for which they may safely trust him).”

The quantity of notes needs to be seen in the light of the quality of the notes. ESB comes from a theological perspective that is generally consistent with historic Protestantism. The notes are mostly reliable and orthodox. However, RSB is far more so. The study notes in RSB are typically more in line with confessionally Reformed convictions. For example, 1 Timothy 2:1-7 has been a controversial passage in terms of the intent and extent of Christ’s atonement. It says that God desires all people to be saved, and Christ gave himself as a ransom for all. ESB gives the Calvinist and Arminian interpretations, but stops short of taking one side or the other. RSB, however, is committed to the historic Reformed understanding of these words: the “all” refers to all types of people. Similarly, the notes about passages dealing with speaking in tongues reveal ESB giving latitude to the continuationist view, whereas RSB is firmly cessationist (i.e. tongues ceased with the apostolic era).

We should also examine how these study Bibles treat the early chapters of Genesis. Unfortunately, both display some openness to less literal understandings of these chapters. Both are consequently more inclined to allow for alternative understandings of the days of creation. However, they are more careful when it comes to the origins of man, with RSB being the most insistent on Genesis 2:7, “man is not formed from pre-existent life.” A little later in Genesis, ESB is not committed to the flood being a global phenomenon, whereas RSB states on Genesis 6:17, “a worldwide flood is in view.”

ESB absolutely outshines RSB in this department. In fact, I have not seen any study Bible ever that has all the resources found in ESB. ESB has numerous helpful charts – RSB has none. At Isaiah 13, for example, ESB has a chart laying out all the oracles against the nations in the prophets. James 5 has a chart illustrating how Leviticus 19 is used in that chapter. ESB also has timelines accompanying all the New Testament books and some of the Old Testament books – again, RSB falls short with nothing to compare. Perhaps the best features of all in ESB are the full colour maps and diagrams. These are plentiful and easy to read. They add a lot of insight into various passages. RSB has no diagrams of any sort, but does include some maps. Unfortunately, these are black and white, few in number, and with only microscopic print. Both RSB and ESB include introductions of the Bible, but the ESB introductions are far more comprehensive and helpful. Finally, RSB includes 70 theological notes scattered throughout on a range of topics including infant baptism, legalism, the unforgivable sin, and divorce. From what I can tell, these notes generally represent the Reformed confessional consensus on these topics.

Each of these study Bibles has a collection of resources following the biblical text. As one would expect, both include a small concordance (with ESB’s being more comprehensive). There’s also a daily reading plan included in both. There are articles in each study Bible on various subjects and ESB’s collection is fuller on this score. ESB also includes helpful features such as a section on “History of Salvation in the Old Testament” and “Old Testament Passages Cited in the New Testament.” However, the RSB includes a section of Reformed confessions. For Canadian Reformed users, having a copy of the Westminster Standards on hand in your study Bible could definitely be considered a plus. This reviewer does question the inclusion of the 1689 London Baptist Confession of Faith, especially since it largely repeats the Westminster Confession (except on points like infant baptism).

When you purchase a study Bible these days, generally you can expect to get some accompanying online extras. The ESB website offers a fully searchable text of the ESV Study Bible with all the notes and resources. Additionally, you get access to all of John Piper’s sermons plus cross-referencing to the most significant Reformation confessions. Although the RSB study notes are available for free at BibleGateway.com, RSB itself does not offer an online searchable text of any kind. However, registering your RSB does open access to a variety of teaching resources from Ligonier Ministries, including some electronic books, and a six month subscription to Table Talk magazine.

There are obviously pros and cons for each of these study Bibles. Whichever one you use, it must be used with discernment. Unlike the text of Scripture itself, the notes and resources are not inerrant. The question really comes down to one’s own ability to discern. What really complicates matters is that most people overestimate their level of discernment – it’s a function of our innate sinful pride. That said, the ESB would be more suitable for a mature Bible student – it requires a greater level of discernment, especially because of the subtlety of some of the errors it features. Since it generally a follows a confessionally Reformed track, the RSB would be a more a suitable study Bible for young people or those who have not yet invested a lot of time and effort into sharpening their theological knowledge. Both study Bibles can be used with great benefit and I certainly would rather anyone diligently use either than none.

Pastor of the Free Reformed Church, Launceston, Tasmania. END_OF_DOCUMENT_TOKEN_TO_BE_REPLACED
This entry was posted on Monday, May 18th, 2015 at 3:55 pm and tagged with ESV Study Bible, Reformation Study Bible and posted in Book Reviews, Resources, Scripture. You can follow any responses to this entry through the RSS 2.0 feed.
« Coming Up: FRCA Synod 2015
New Resource Added: Liturgical Helps Version 2.0 »