Listening As If For the Last Time 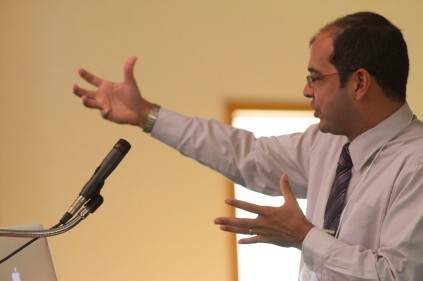 In his book Expository Exultation, John Piper describes how he prays right before preaching.  As an elder is reading the text for the sermon, Piper pleads with God for strength and effectiveness in the pulpit.  He understands the significance of what he’s about to do and so he begs God for help.  I can relate to that.

I’ve been preaching now for over 20 years.  In earlier times, I’d usually pray beforehand, but back then it was mostly because of nervousness and fear.  My first time on a pulpit in a Canadian Reformed Church was in my home congregation in Edmonton.  At that time (1999), it was the largest Canadian Reformed Church – over 600 members.  I was petrified.  What if I said something wrong?  What if I messed up the order of worship?  I had everything I had to say written down, just in case.  And I prayed and prayed.

As time went on, I became more comfortable with preaching and leading worship.  Only then did the momentous significance of what I was doing on the pulpit begin to really grip me.  It was a process.  Somewhere along the way I read the words of Richard Baxter, “I preached as never sure to preach again, and as a dying man to dying men.”  Along the way, I experienced more than once that a person heard me preach on one Sunday and then, by the next, they were no longer there.  God had called them out of this life.

The event that most impacted me was how God called home a United Reformed colleague, Rev. Eric Fennema.  I didn’t know him personally.  But I heard about him from a close friend who did.  One Sunday he was preaching as a guest minister in the URC in Lynden, Washington.  He preached a powerful, amazing sermon on the Parable of the Ten Virgins (Matt. 25:1-13).  You can still listen to it here.  He exhorted the congregation to always be ready to meet the Lord.  If you were to make one sermon your last, you would want it to be that one.  It was his last.  Late the following week he was playing golf and had a heart attack.  He never preached again.

Thus I gradually learned the urgency of preaching.  Preaching is life and death.  I now approach each sermon with two thoughts in mind.  First, what if this is the last sermon I ever preach?  Second, what if this is the last sermon someone in the pews will ever hear?  Those thoughts drive me to make sure I preach the gospel each time.  They also drive me to prayer far more than my early nervousness ever did.

Late last year and early this year, I enjoyed a sabbatical of several months.  I love preaching, but having that burden of urgency off my shoulders was refreshing.  I was blessed to have my old pastor, Rev. Richard Aasman, on the pulpit for a good portion of my sabbatical.  I could just sit and listen – and ponder.  I then learned there’s a flip-side to the urgency of preaching.

Listening to the preaching of God’s Word is also a matter of momentous significance.  If you knew that this was the last sermon you would ever hear preached, how would you listen differently?  But you don’t know.  It could be your last sermon – and that’s how you ought to approach it.  You should approach it prayerfully.  Ask God to help you treat it as the life-and-death proclamation of his Word to you.  Ask for the Holy Spirit to help you listen as if your life depends on it.

Eric Fennema’s passage from Matthew 25 certainly warns us, “Watch therefore, for you know neither the day nor the hour” (v.13).  You don’t know when the Bridegroom will appear with the clouds of heaven, but you also don’t know when he will call you to himself.  Therefore, you need to be watchful.  Part of being watchful is giving heed to his every word to you.  Urgently hang on his words as he speaks to you through preaching.  As our Lord says in another place, “Pay attention to what you hear…” (Mark 4:24).

To drive home the urgency of listening to God’s Word preached, we could rephrase Baxter’s dictum:

“I listened as if never sure to listen again, and as a dying man listening to a dying man.”

It’s a lesson better learned sooner rather than later!

Comments Off on Listening As If For the Last Time   |  tags: Eric Fennema, John Piper, Richard Baxter, urgency of listening to preaching, urgency of preaching | posted in Church life, Preaching