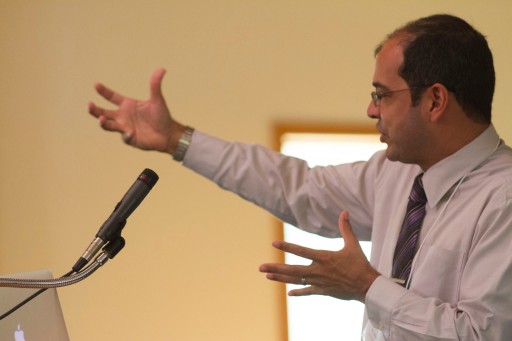 When I was growing up, if our minister announced that he was going to have a series of sermons on a book of the Bible, we knew what to expect.  No matter the length of the book, this meant a series of 6-8 sermons.  It meant that, in each of those sermons, the minister would take one or two verses as his “text” and then work from that.  Those verses (the “text”) would generally be the thematic launching pad for dealing with other material in the context.  Each sermon would not only deal with the text, but also circle around the text in some way.

In my seminary training, this same approach was encouraged.  Our preaching professor suggested we preach with series of sermons on books.  We were taught to keep the series short (6-8 sermons) because people’s attention spans are limited.  We were also taught to isolate one or two verses as our “text” and then develop the sermon out of that.  If I’m not mistaken, this method was called the “analytic-synthetic” approach to sermon prep and delivery.  To be honest, I just called it plain confusing.  Sermons delivered with this method can suffer in terms of structure, making them difficult for listeners to follow.  I also found it difficult to prepare sermons in this way.  To me, it seemed unnatural, awkward, forced.

When I first started preaching (as a missionary), I largely followed my training.  However, since I was preaching to people who had not been accustomed to our CanRC preaching idiosyncrasies, I soon found that these methods were not effectively communicating God’s Word.  I wanted to be clear, not confusing.  Having done some reading and having heard others preach, I decided to try a more systematic and common-sense method of preaching.  I would take a passage of Scripture and in my sermon work through that passage from beginning to end.  No, it’s not a lecture.  You explain the text, but also throughout apply the text, and above all, demonstrate how that text points us to Christ.

As I finished up my missionary service and began serving a regular congregation, I began thinking more about what it means to preach in a series.  Is it necessarily true that a series on a book must be limited to 6-8 sermons?  I put the question out there on Facebook to gauge the sentiments of congregants and others.  I was encouraged to hear that people didn’t feel that this limitation was necessary.  So I said, “What if I were to preach straight through the Gospel of Mark, verse by verse?”  The consensus was: “Go for it.”  So I did.  I began preaching right through Mark, starting in 2007.  Mid-way through that series, I received a call to Hamilton and, after catching them up, I continued with the series there.  After over 70 sermons, I finished Mark in 2012.  Did anyone ever complain about that series being too long?  Never, at least not to my face or to my consistories.  In fact, quite to the contrary, people seemed to appreciate it.  I’m sold on “serial expository preaching” — preaching that goes through the whole book, verse by verse, beginning to end.

Over nearly 16 years of ordained ministry, I’ve now preached completely through several books:  Ruth, Jonah, Haggai, Mark, and Colossians.  Some of these are obviously shorter and took less time.  Colossians was 18 sermons, preached over about a year and a half.  Earlier this year I started on the Gospel According to John.  This will be another epic series.  This past Sunday, I preached my 13th sermon and that was on John 3:9-15.

To clarify, when I preach straight through a book that doesn’t mean that I’m going to do it every single Sunday, Sunday after Sunday.  I do take breaks and do some other things along the way.  Sometimes I will insert a smaller series on a shorter book — I’ve also done a couple of thematic series looking what different Scripture passages say about certain issues or challenges.  During the summer months, I often ask congregation members for suggestions on texts that they’d like to hear sermons on.  Besides those occasions, we also have Easter, Ascension, Pentecost, Christmas, public professions of faith, ordinations, etc.  So it’s not like a congregation is going to only get a steady diet of one book every Sunday morning.

What are some of the advantages to serial expository preaching?  For a busy preacher, it means that you become proficient (and efficient) in working with one particular book.  For example, there’s the area of canonics when doing exegesis.  Canonics involves familiarizing yourself with the human author of the book, the circumstances in which the book was written, the original audience, the structure of the book, the book’s theme(s), etc.  After preaching through the first five or six passages, a preacher is going to have the canonics down cold.  While you might briefly review it when looking at a new text, it will not take up much of your time.

On another level, following this approach means that you don’t have to spend any time searching for your next passage.  Text choice is already decided upon, saving time.  Moreover, you can purchase commentaries and other resources accordingly.  If you know that you’re going to be spending the next couple of years in John, you can purchase a few good commentaries on John and you’ll have what you need on hand.

In terms of advantages for the congregation, they are exposed to the full-range of God’s revelation in a particular book.  They are not subjected to the minister’s whims in choosing a text, but they will get to hear everything from that book.  That will include difficult or challenging passages that a minister might otherwise want to bypass — for example, in preaching through Mark, I was forced to deal with the thorny question of divorce and remarriage.  This approach also models how to study and read the Bible.  When we read the Bible, we read it in the obvious way, straight through.  Why shouldn’t preaching do the same?  That brings me to another advantage:  clarity for the listener.  When a listener has their Bible open and they’re following an expository sermon, they will know where the minister is at in the text.  They can say, “Oh, we’re at verse 12.  He’s explaining and applying verse 12.”  It then also becomes clearer that the minister is not sharing his own thoughts or opinions, but preaching the Word of God.  Serial expository preaching is more transparent preaching.

There are some limitations to this approach.  One is the acknowledgement that not every book of the Bible is the same.  For example, the Psalms cannot be treated the same way as Mark or John.  While I think there is some structure to the Psalter in its canonical form, it’s not as developed or obvious as in a narrative book.  Moreover, the Psalter is not even really a book — it’s more of a collection.  Proverbs is another example of a collection.  I can’t see myself ever preaching serially, verse-by-verse, through Proverbs.  I have preached on a number of individual Proverbs, but I don’t believe this book lends itself to the method I’ve been describing.

When it comes to the epistles, there are passages where the logical progression follows the numerical order of the verses and you can proceed verse-by-verse.  But sometimes the thought process in the passage requires the preacher to take a different approach.  For instance, in some passages there is a clear structure known as a chiasm.  You can’t work straight verse-by-verse through that.  It’s not meant to be treated that way.  There obviously has to be some flexibility.

Am I saying that serial expository preaching is the only and best way to preach?  No, not at all.  I’m comfortable with it and I’ve benefited from it.  From the feedback, I’ve received over the years, it sounds like congregations do work with it and have been blessed by it.  Really, all I can do is commend it for your consideration.