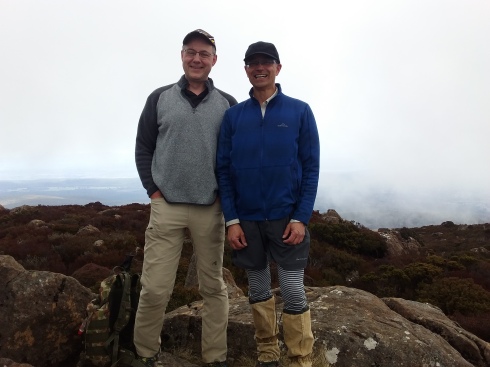 It was back in 2013 and I was at a conference at Mid-America Reformed Seminary near Chicago.  Amongst the new faces I encountered was a pastor from the Reformed Churches of New Zealand (RCNZ), Rev. David Waldron.  One of the reasons I remember him is that he was an Englishman serving in a Kiwi church — which I found rather curious.  Fast forward a couple of years and, curiously enough, I was a Canadian serving an Aussie church.  This Aussie church was now in a sister-church relationship with the RCNZ.  A couple of my colleagues from Western Australia had organized exchanges with colleagues from New Zealand to fortify this relationship — which I thought was a great idea, and so did my elders in the Free Reformed Church of Launceston.  But who could I approach in New Zealand?  Who did I know “across the ditch”?  I wrote to David and put the idea to him — and he and his elders in Christchurch agreed that it would be worthwhile too.  While it took a little while to organize, eventually in the end of September and beginning of October, we managed to make it happen.  What a blessing it was for everyone involved!

The exchange took place in two phases.  The church leadership on both sides agreed that it would be most beneficial if these two phases overlapped.  That would allow David to spend a few days with me in my home environment in Tasmania, and vice-versa in New Zealand.  We would each spend approximately ten days in each others’ church community, of which about 5-6 days would be spent together.

It began with David’s arrival in Launceston on the evening of September 27.  During his time in Tasmania, he gave a presentation for the Free Reformed church community introducing the RCNZ.  He spoke at a men’s breakfast on the topic of pornography.  He addressed our young people on a Sunday evening, speaking about his varied life experiences and journey to the Christian faith.  Of course, he also led four worship services at FRC Launceston over two Sundays.  His powerful speaking and preaching were much appreciated by one and all.  Additionally, since David is an enthusiastic outdoorsman, we treated him to several day hikes and even an overnight trip to Tasmania’s majestic Frenchman’s Cap.

For my part of the exchange, I made the jaunt across the Tasman Sea on October 3.  It’s a flight of just over three hours (depending on the winds) — in terms of distance, it’s not much different from a trip to Perth, WA.  I really enjoyed the hospitality of my Kiwi brothers and sisters in Christchurch.  I was also able to do some day hikes in the vicinity and spent some time with Rev. Dirk Van Garderen doing some trout fishing (but not catching!).  In terms of ministry, I led four worship services at the Reformed Church of Christchurch.  I gave the RCNZ community in Christchurch an introduction to the Free Reformed Churches of Australia.  I was also invited to be the speaker at the church’s family camp in Waipara, just to the north of Christchurch.  I spoke on the topic of being an outward looking church, as well as leading two devotions.

Christchurch is a beautiful city, but sadly it still bears the scars of the earthquakes that rocked the region in 2011.  Numerous abandoned commercial buildings and homes remain standing, still awaiting demolition.  In parts of the city, entire neighbourhoods stand devoid of homes which have already been demolished — only the streetlights and streets remain.  Nevertheless, the city is rebuilding.  New homes dot many streets.  For their part, the Reformed Church built a beautiful and functional new building on Cornwall Street.  And the city continues to maintain a spectacular system of English-style parks, the most stunning of which is Hagley Park near the city centre.  To the south of the city are the Port Hills, the remnant of an ancient volcano.  On a good day, to the west one can also spy the nearby Southern Alps in all their vertiginous splendour. 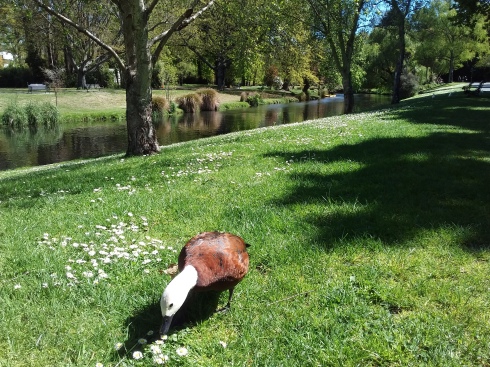 Like FRC Launceston, the Reformed Church of Christchurch was instituted in 1953.  Both churches were originally founded by Dutch immigrants.  Both hold to the Three Forms of Unity, but the RCNZ also maintain the Westminster Confession.  The Christchurch congregation is growing in terms of diversity, increasingly reflecting the ethnic makeup of the surrounding community.  While there I met a brother who’s a pastor originally from Egypt, and a couple from China who, with their young daughter, were just about to be baptized and received into membership.  While there are some small differences in practice (i.e. our singing is accompanied by a pipe organ, theirs by piano plus one other instrument), I was struck by how much I felt at home with these brothers and sisters.  Our true unity in Jesus Christ was beautiful to see and experience.  I was greatly encouraged by our mutual love for the gospel and a desire to share that good news with others.

There are a number of benefits flowing from these sorts of exchanges.  One is definitely learning to understand better one anothers’ unique backgrounds and history.  That helps us to be more charitable in our assessments of one another.  Another benefit is growing awareness of one another on both sides.  A brother or sister pondering a move to NZ would be encouraged by the knowledge that they will easily find a faithful church home amongst the RCNZ congregations — and I trust that the reverse would be true for someone pondering a move west across the Tasman.  Then there’s also the sharing of ideas back and forth.  For example, I was intrigued by the church camp idea.  Is that something we could/should implement in our church?  Finally, there’s the valuable aspect of building friendships.  Through such an exchange, believers on both sides forge new bonds.  The RCNZ and FRCA come to life for all involved, not just as initials or names of distant churches, but as bodies of believers made up of people we know, respect, and love.

As mentioned at the beginning, we didn’t pioneer this idea.  It’s been done before.  Nevertheless, for those churches which haven’t yet done it, whether in New Zealand and Australia, let me highly recommend it.  It’s a fantastic way to “put meat on the bones” of our sister church relationship.