The First Mark and Mission

Of the Belgic Confession’s articles on the doctrine of the church, article 29 is probably the most well-known amongst Reformed church members.  It describes the marks of the true and false church.  First among the marks of a true church is “the pure preaching of the gospel.”  What does this mean for mission?  What does this mean for our churches in relation to the lost around us in our own communities?

In the early 1950s, the Christian Reformed Church in North America (CRC) was beginning to develop a deeper conviction about its responsibility to spread the gospel at home and overseas.  To be sure, missionary consciousness was part of the CRC’s fabric from its beginning in 1857.  Initially, prayerful and financial support were given to Dutch and South African mission works.  It took some time for the CRC to develop its own missionary efforts.  There were extensive discussions at early CRC Synods about whether mission should be a denominational, classis, or local affair.  Eventually, the CRC settled on a denominational approach to mission.  The CRC Synod of 1880 appointed their first missions committee, then called the “Board of Heathen Missions.” In 1888, the decision was made to begin mission work among the American Indians.  In 1896, the CRC finally began work among the Navajo and Zuni peoples of the American Southwest.

The CRC began overseas work in Nigeria a few decades later.  It was one of the missionaries to Nigeria who really began to stir up discussions about mission in the CRC.  Unfortunately, Rev. Harry Boer would go on to become infamous for his objections to certain points in the Canons of Dort, but for our interests here, we can note his role in stimulating CRC interest in spreading the gospel in the mid-twentieth century.

In 1952, a Christian Reformed consistory overtured the CRC Synod to “to draw up a creedal statement concerning missions.”  The CRC Synod declined to do so, on the grounds that “The work of Missions is included in the connotation of the first mark of the church, namely ‘the faithful preaching of the Word.'”  This was the earliest rumblings of dissatisfaction in the CRC with the Three Forms of Unity regarding mission — a history that I have traced and evaluated in one of the chapters of For the Cause of the Son of God.  Interestingly, the CRC Synod appealed to article 29 of the Belgic Confession.  Speaking through its Synod, the CRC in this era considered that the Belgic Confession spoke to the missionary task of the church.

However, this was not a unanimously held position in the CRC.  Later in 1952, Harry Boer published his response to the Synod’s decision.  He pointed out that the CRC edition of the Belgic Confession then in use did not support the grounds for this decision.  The relevant part of article 29 of that edition reads, “The marks by which the true Church is known are these:  If the pure doctrine of the Gospel is preached therein…”  Boer built his case on the word “therein.”  He noted that the earlier Dutch and Latin translations did not have that word.  He did not mention the earliest French editions of 1561/62, but they do not have it either.  While Boer was wrong about the Belgic Confession in many respects, he did get this correct.  There was a problem here with the old CRC edition of the Confession.

When the CRC published a new edition in 1985, this problem was corrected.  The Canadian Reformed Churches also had “therein” in their first English edition.  I suspect that it originally came from the English text adopted by the CRC in 1912.  But when a new edition of the Confession was adopted by the CanRC in 1983, “therein” was gone.

Several North American Reformed churches continue to use the English text that basically dates back to 1912 and includes “therein” in article 29.  Among these are the Heritage Reformed, the Free Reformed, the Protestant Reformed and the Reformed Church in the United States.  Until this is corrected, Boer’s point sticks among these brethren:  one cannot appeal to the first mark of the true church in article 29 as a place where the Belgic Confession speaks about mission.

One might also ask whether it is even biblical to restrict the mark of a true church to what goes on in established congregations in their public worship services.  This is a place where the original 1561 Belgic Confession can help us.  Matthew 28:18-20, the Great Commission, is one of the proof texts for this statement in the original confession as penned by Guido de Brès.  In that passage, our Lord Jesus sends his disciples out to preach, teach, and disciple “all nations.”  Through those disciples, our Lord was also sending out his church of all ages and places.  Clearly the original intent of the Belgic Confession was to include the missionary calling of the church under the first mark.  A church that does not faithfully proclaim the gospel inside and outside its membership has a credibility problem when it comes to being a true church.

The Reformed churches in the days of de Brès understood this well.  Being Reformed meant being outward looking.  It meant looking outwards and seeing the vast numbers of lost people who needed the gospel because they did not have Christ and were heading for hell.  It meant that the pastors were compelled by love to take seriously the charge of Paul to Timothy:  “do the work of an evangelist” (2 Tim. 4:5).  And they did.

But this outward looking orientation indicated by article 29 was not limited to pastors.  Martyrology is a genre of religious literature dedicated to the stories of those who have been martyred for their faith.  The most well-known in English is Foxe’s Book of Martyrs.  The first Reformed martyrology was written in French by Jean Crespin in 1554.  In that first edition, as well as in subsequent ones, Crespin described not only the martyrdoms of Reformed pastors, but of many Reformed church members.  They were often killed for sharing the biblical gospel with friends and neighbours.  Compelled by love, they could not keep silent.  Among them were believers who had been pastored by de Brès, including at least one entire family, the Ogviers of Lille.

According to our Belgic Confession, the navel-gazing, self-obsessed church places a question mark behind its status as a true church.  The ghetto mentality is not Reformed.  When we’re labelled “the frozen chosen” and we deserve it, we’re not being faithful to either our confessions or Scripture.  Instead, being Reformed means being missional, not only in terms of sending out missionaries to distant lands, but being outward looking and caring about the lost right in front of us who need the gospel. 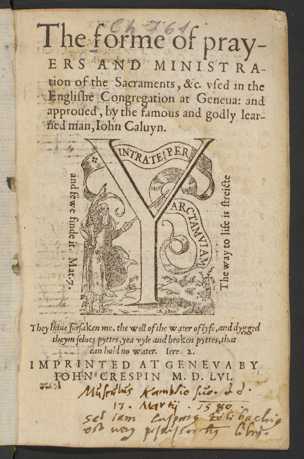 Jean Crespin is a Reformation figure with a compelling life story.  Like Calvin, he was trained as a lawyer in France.  Like Calvin, he became Reformed.  But unlike Calvin, he didn’t become a theologian or pastor.  Rather, having been condemned for heresy in France, he moved to Geneva and turned to the world of books and publishing.  Jean Crespin compiled and published the first Protestant martyrology, his Histoire des Martyrs.  Crespin relied on various sources for this work and one of those was none other than Guy (Guido) de Bres.  Later on, Crespin would publish a book containing the debates that de Bres participated in while in imprisoned, as well as his last letters and the account of his martyrdom.  Procedures tenues a l’endroit de ceux la religion du pais bas (Procedures Held with Regard to those of the Religion of the Netherlands) was published by Crespin in Geneva in 1568.  Browsing through e-rara last week, I came across something that Crespin published in English in 1556.  You can find “The Forme of Prayers and Ministration of the Sacraments” of the English congregation in Geneva here.  It makes for fascinating reading.  It includes a Psalter, but interestingly the psalms are not set to Genevan tunes (at least not that I can tell).  You can find other works published by Crespin and available at e-rara here.