The Extent of Inerrancy 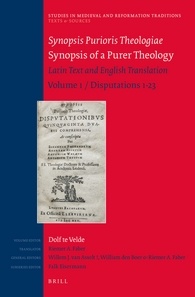 I’m working on my review of Synopsis Purioris Theologiae, also known as the Leiden Synopsis.  This is an important piece of our Reformed theological heritage.  It was first published in 1625 and served as a reliable theological handbook for many years.  It’s only just appeared in English translation.  My review is being submitted to The Confessional Presbyterian, by the way.  Let me just share a brief excerpt from my review:

The Leiden Synopsis is surprisingly relevant on some important theological issues facing the Church today. For example, the doctrine of biblical inerrancy continues to be debated, with some claiming that it is a modern invention, perhaps dating back to the nineteenth century at the earliest. However, in disputation 2, we find Walaeus writing, “It is made clear to us that the authority of Holy Scripture is much greater than that of the Church by the fact that the Church is capable of erring while Scripture cannot” (71). Sometimes it is claimed that biblical inspiration or inerrancy only extends to doctrines. In other words, the core teachings of Scripture are inspired and even inerrant, but this does not apply to peripheral matters.  This notion existed in the days of the Leiden Synopsis already and Walaeus had a ready answer in thesis 28:

And here one ought not to pay heed to Socinus and several other Christians who grant that Holy Scripture is divinely-originated in issues of special importance, but that its authors in situations and circumstances of lesser importance were abandoned by the Holy Spirit and could have erred. Because this opinion paves the way for contempt, and expressly contradicts Scripture which testifies that “everything that was written was written for our instruction (Romans 15:4), and “all Scripture is God-breathed” (2 Timothy 3:16). Likewise, “no Scripture is of one’s own interpretation” (2 Peter 1:20); indeed, “not even one iota will disappear from the Law” (Matthew 5:18). “And it is not permitted for any man to add or to remove from it” (Deuteronomy 4[:2], Revelation 22[:18-19].” (69)

In a footnote, the editors point out that besides Faustus Socinus, Walaeus noted elsewhere that Erasmus displayed “the same pernicious view.”

So am I going to recommend the Leiden Synopsis?  Absolutely!  More information about the book can be found here.

CanRC Signers of the Chicago Statement on Biblical Inerrancy

The other day someone drew my attention to this list of people who originally signed the Chicago Statement on Biblical Inerrancy.  There are lots of well-known names:  R. C. Sproul, Greg Bahnsen, W. Robert Godfrey, D. A. Carson, John MacArthur and many others.  But there are also three Canadian Reformed ministers who signed:  Jelle Faber, Heinrich Ohmann, and Lubbertus Selles.   This was in 1978 and these three men then made up the full-time faculty of the Canadian Reformed seminary here in Hamilton.  Faber taught dogmatics, Ohmann taught Old Testament, and Selles taught New Testament.   This further proves that there is a tradition of affirming biblical inerrancy in the Canadian Reformed Churches.  At one time, the entire faculty of our seminary affirmed it! 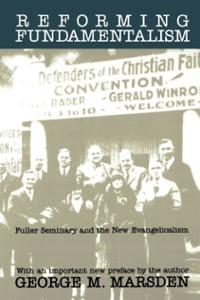 A significant number of my books were gifts from a retired dairy farmer in Ontario, Gilbert Zekveld.  Following his retirement and especially after the death of his wife, Gilbert spent a lot of time reading and studying and translating Dutch books into English.  He contacted me after I reviewed one of the books he translated and we became good friends — especially since he lived just down the road from us in Hamilton.

One of the books I received from Gilbert was George Marsden’s history of Fuller Seminary, Reforming Fundamentalism: Fuller Seminary and the New Evangelicalism.  I finally got around to reading it over the last number of weeks.  As I was reading it, I was thinking:  why would Gilbert buy and read this book?  What would interest him in this book?  Since he’s now with the Lord, I can’t ask him directly anymore.  But he did leave a lot of notes in the book that give some clues.

Gilbert spent much of his life in the Christian Reformed Church.  Many of the books I received from him bear the evidence of that — there are CRC bulletins scattered through many of them.  However, like many others in the 1960s and 1970s, Gilbert became concerned about the direction the CRC was taking, especially in regards to how it considered the authority of Scripture.  This would later bear fruit in decisions made by the CRC on women in office.  Gilbert eventually left the CRC because of these concerns.

But how does that connect to Fuller Seminary?  Well, Fuller started off as a fundamentalist institution with very strict views on the nature and authority of Scripture.  In the first decade of its existence, and probably also into its second, the notion that women could serve in ecclesiastical offices would have found no home at Fuller.  However, all of that began to change significantly in the 1960s.  By the early 1980s, nearly 20% of the M.Div. students at Fuller were women.  In some ways, the trajectory followed by Fuller is the same as that followed by the CRC and Marsden does mention some direct connections between Fuller and the CRC.  I think that’s why Gilbert Zekveld was interested in this book.

Harold Lindsell was deeply involved with the early history of Fuller.  However, in the 1970s, he was greatly troubled by the direction that Fuller had taken and was vocal about his concerns.  In his 1976 book Battle for the Bible he wrote:

“Down the road, whether it takes five or fifty years, any institution that departs from belief in an inerrant Scripture will likewise depart from other fundamentals of the faith and at last cease to be an evangelical institution in the historical meaning of that term.  This is the verdict of history.”  (quoted by Marsden, 277).

Whether it’s the CRC or Fuller or ourselves, when one starts tinkering with the doctrine of Scripture, there are serious consequences.  That’s why it’s important for us to be confessional churches.  The Reformed confessions, when subscribed and believed seriously, keep us anchored to a biblical view of the Bible.

(The above was first posted on the old Xanga Yinkahdinay on January 15, 2009)

In 2009, Clarion published a series of articles dealing with the doctrine of biblical inerrancy.  These have just been uploaded and added to the resources available on this site.  You can find the file with the complete set of articles here.

Book Review: The Theology of B. B. Warfield 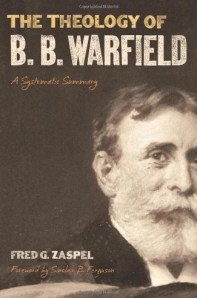 Ninety years after his death, Benjamin Breckinridge Warfield continues to be a respected voice in Reformed theology.  Along with Jonathan Edwards, the Hodges, and a few others, Warfield is one of the pre-eminent Reformed theologians in North American church history.  Yet for all his renown, few have given him a careful reading.  Popular ideas persist about what Warfield believed about this or that.  Part of the problem is Warfield himself never systematically laid out his theology in one place.

Fred Zaspel has therefore done us a favour by carefully collating Warfield’s theology into one helpful volume.  After an introduction surveying Warfield’s life and work, Zaspel follows the standard topics of systematic theology and distils Warfield’s thought on each one.  Here and there he also interacts with interpreters, particularly the ones whom Zaspel feels have not done justice to Warfield.

Zaspel himself is a sympathetic interpreter.  A Reformed Baptist pastor in Pennsylvania, he is broadly in agreement with Warfield’s theological bent.  Where he personally might depart from Warfield (regarding infant baptism, for instance), Zaspel remains respectfully silent, just simply laying out the Princeton theologian’s views without comment.  At the end of the volume he does offer some critique, but for the most part he allows Warfield to speak for himself.  That’s not to say the book consists mostly of quotations – most of the time Zaspel summarizes and paraphrases.

The Theology of B. B. Warfield will appeal most to pastors, scholars, seminary students and informed “lay people.”  Like Warfield himself, it is not light and fluffy.  Technical language is used and readers are expected to have an intermediate level of theological knowledge.

There are four areas in the book especially worthy of further comment.  Early on, Zaspel deals with Warfield’s views on apologetics.  He argues that Warfield has been unfairly portrayed by later Reformed apologists such as Cornelius Van Til.  Van Til argued that Warfield did not give adequate expression to the effects of sin upon the unregenerate mind.  Zaspel attempts to defend Warfield against this accusation.  He notes that Warfield did not attribute “right reason” to the unbeliever and spoke repeatedly of the pervasiveness of sin (77-78).  However, Zaspel also states that Warfield maintained that unregenerate man “is able to see the compelling force of ‘right reason.’”  Unfortunately, Zaspel is unable to see that this justifies Van Til’s complaint.  While he adds some useful nuance to Warfield’s views, Zaspel does not succeed in exculpating Warfield on his inconsistencies in apologetics.

Warfield is known as the great defender of biblical inspiration and inerrancy.  Therefore, one would expect a book of this nature to deal with those subjects at length.  Zaspel does not disappoint.  He outlines how contemporaries of Warfield and latter-day interpreters have accused the Princetonian of “rationalistic scholasticism” in his doctrine of the Bible.  He helpfully illustrates how these charges fall well short of the mark.

A third area of interest is Warfield’s thought on evolution.  The claim is often made that Warfield had an appreciation for evolution.  The argument is advanced that if Warfield can be regarded as a great Reformed theologian and he held to evolution, then how can contemporary advocates of evolution be excluded from Reformed churches?  Those making such claims ought to read Zaspel’s careful summary of Warfield’s views and how they developed.  He concludes Warfield could at best be said to have been noncommittal or to be critically agnostic (386-387).  However, Warfield also developed a “strengthening conviction against evolution” (385).

Finally, one of Warfield’s greatest concerns was the influence of perfectionism or Keswick “higher life” spirituality.  In his day there were popular preachers and writers claiming it was possible for Christians to no longer sin in this age.  There were also those who claimed that Christians should not regard themselves as sinners, since they are a “new creation in Christ.”  They denied the biblical teaching that, in this age, we are both justified and sinners (simul iustus et peccator).  These false teachings are still around today.  Today we still need Warfield’s biblical defense against these errors.  Zaspel provides a helpful door.  Warfield approvingly quoted Thomas Adam, “The moment we think we have no sin, we shall desert Christ” (465).

The Theology of B. B. Warfield is a comprehensive guide to the thought of “the Lion of Princeton.”  There’s no question it will be a standard reference for decades to come.  Anyone interested in the development of Reformed theology on our continent needs to have it and read it.