Warfield: Election is not Fatalism 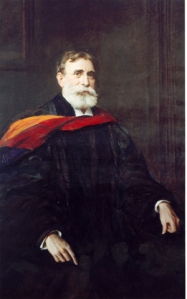 This coming Sunday afternoon I’ll be preaching on the Reformed doctrine of election.  Unfortunately, I don’t have the opportunity to deal with every possible aspect of this subject, nor can I address every possible objection.  But let me here mention just one thing that I won’t discuss on Sunday and that’s the idea that election is a form of fatalism.  B. B. Warfield had a fairly good illustration of this involving a young Dutch boy:

This little boy’s home was on a dyke in Holland, near a great wind-mill, whose long arms swept so close to the ground as to endanger those who carelessly strayed under them.  But he was very fond of playing precisely under this mill.  His anxious parents had forbidden him to go near it; and, when his stubborn will did not give way, had sought to frighten him away from it by arousing his imagination to the terror of being struck by the arms and carried up into the air to have life beaten out of him by their ceaseless strokes.  One day, heedless of their warning, he strayed again under the dangerous arms, and was soon absorbed in his play there — forgetful of everything but his present pleasures.  Perhaps he was half conscious of a breeze springing up; and somewhere in the depth of his soul, he may have been obscurely aware of the danger with which he had been threatened.  At any rate, suddenly, as he played, he was violently smitten from behind, and found himself swung all at once, with his head downward, up into the air; and then the blows came, swift and hard!  O what a sinking of the heart!  O what a horror of great darkness!  It had come then!  And he was gone!  In his terrified writhing, he twisted himself about and looking up, saw not the immeasurable expanse of the brazen heavens above him, but his father’s face.  At once, he realized, with a great revulsion, that he was not caught in the mill, but was only receiving the threatened punishment of his disobedience.  He melted into tears, not of pain, but of relief and joy.  In that moment, he understood the difference between falling into the grinding power of a machine and into the loving hands of a father.  That is the difference between Fate and Predestination.  And all the language of men cannot tell the immensity of the difference.