Quotable Church History: “You are going to burn a goose…” 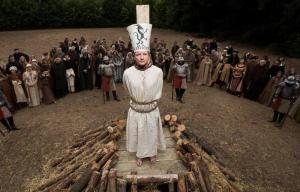 This is the fifth in a series on famous quotes from church history. We’re looking at who said these famous words, in what context, and, where applicable, whether it’s biblical.

Today we’re looking at something from one of the “Forerunners of the Reformation.”  There were several notable figures who came before Luther.  Men like Jan Huss (1372-1415) hit on some of the same concerns Luther would about a century later.  While Huss accepted Catholic teachings such as transubstantiation and purgatory, he rejected indulgences and the position of the pope as the head of the Church.  Huss argued that Christ is the only head of the church and the Church must submit to the Word of God as its ultimate authority.   His critiques brought him into conflict with the Church.  On a promise of safe passage from the Holy Roman Emperor, Huss appeared at the Council of Constance with the hope of clearing his name.  It didn’t happen.  Instead, he was determined to be a damnable heretic and condemned to burn at the stake.  Before he was martyred, various sources will tell you Huss said something like, “You are going to burn a goose [“Huss” means “goose” in Bohemian], but in a century you will have a swan that you can neither roast nor boil.”

Huss was known to do word plays with his surname.  He was exiled from his home city of Prague in 1412 and, while in exile, he wrote a letter to the “believers in Prague.”  He referred to his enemies as those who wanted to “entwine the simple bird in the snare of citations and anathemas.”  Huss goes on to write:  “But if that bird, which is a mere domestic fowl, whose flight is circumscribed, and far from lofty, has broken through their nets, how much more will other birds that soar aloft as they announce the Word of God, despise such intellectual wiles.”  Note well: that’s a reference to soaring birds of prey, not to swans.  There’s also nothing about burning, roasting, or boiling.  In fact, this letter appears well before his fate as a martyr had been determined by the Council of Constance in 1415.

So what are the origins of this quote?  Apparently Martin Luther.  Luther wrote,

St. John Huss prophesied of me when he wrote from his prison in Bohemia, “They will roast a goose now (for ‘Huss’ means ‘a goose’), but after a hundred years they will hear a swan sing, and him they will endure.” And that is the way it will be, if God wills.

But the problem remains that we don’t have a primary source where we find Huss writing this.  In an article entitled “Incombustible Luther,” Robert Scribner hypothesizes that Luther combined what Huss wrote in 1412 (quoted above) with a statement made by another martyr condemned by the Council of Constance, Jerome of Prague.  A follower of Huss, Jerome had said he wished to see what people would think of his condemnation a hundred years hence.  Luther seems to have put those two things together.  According to Scribner, at Luther’s funeral his eulogist Johannes Bugenhagen took it a step further and now Hus’ words became:  “You may burn a goose, but in a hundred years will come a swan you will not be able to burn.”  By 1556, these words were commonly believed to have been said by Huss as he went to his death.

Taken together, all this means it is highly likely Huss never said these words.  In all likelihood, it’s just a pious legend.  In hindsight, however, we can see how God did prepare the way for the Reformation through men like Huss.  Huss left behind a lasting legacy of anti-clericalism in Europe.  This providentially gave Luther the freedom to preach as he did — so when the Catholic Church would try to silence Luther as it did Huss, it would end in failure for them and success for the gospel.