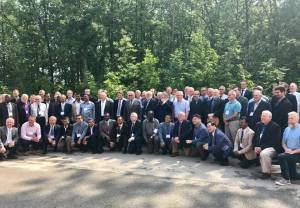 By a vote of 25-4 (with two abstentions), the International Conference of Reformed Churches has decided to suspend the Reformed Churches in the Netherlands (RCN).  This comes after the RCN last month at their synod decided to open all the offices of the church to women.  The ICRC is one of the world’s most important ecumenical organizations for confessionally Reformed and Presbyterian churches.  It consists of over 30 churches from all over the world.  With this decisive action, the RCN receives a clear message that it is out of step with global Reformed Christianity.

The question of what to do with the RCN led to several hours of debate up to this point at the ICRC.  The Orthodox Presbyterian Church made the initial proposal, but found vocal support from the Canadian Reformed Churches, the United Reformed Churches, the Free Reformed Churches of South Africa, and others.  Voices were also heard cautioning against suspension — notably, the Christian Reformed Churches in the Netherlands and the Presbyterian Church of Eastern Australia (PCEA).  Rev. Dr. Rowland Ward from the PCEA was quoted in the Dutch press as arguing that the body had to come up with substantive biblical arguments to take action against the RCN.  He noted that several biblical passages could be understood at first glance as supporting women in office.  So, Dr. Ward said, “Why couldn’t there be freedom on this point?”  He was also quoted as saying that, for him, the RCN was still Reformed and suspension would not be appropriate “for a church that has been so faithful in our midst.”  In personal correspondence, however, Dr. Ward clarified that it was explicitly made clear that neither he nor the PCEA support women’s ordination.

Voting took place Monday on the OPC proposal (which can be found here).  The first, third, and fourth parts of that proposal passed readily 28-1.  It was the second part that took a little extra time:  to suspend the RCN immediately.  The Christian Reformed Churches in the Netherlands proposed a substitute motion to give the RCN time until the next meeting to reconsider their membership.  This motion failed 8-21 with two abstentions.  The body then voted on the second part of the OPC proposal as presented and it passed without difficulty.

The RCN now has four years to repent of their decisions regarding women in office.  Since women are already being ordained in the RCN, it is difficult to see how such repentance could be effected federation-wide.  But if, somehow, they are able to reverse course, the RCN will continue to make valuable contributions to global ecumenicity through the ICRC.  If not, their membership in the organization they helped to found will be terminated in 2021 at its tenth annual meeting. 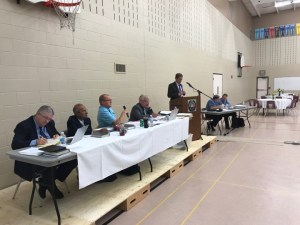 Debate about the future of the Reformed Churches in the Netherlands (RCN) as members of the International Conference of Reformed Churches (ICRC) has been continuing in Jordan, Ontario.  At their synod last month, the RCN fully adopted women’s ordination.  Anticipating this move, the Orthodox Presbyterian Church mandated their delegates to the ICRC to propose the suspension of the RCN.  Details of that proposal can be found here.

On Friday afternoon debate continued about the OPC proposal.  The delegates from several ICRC member churches vocally supported it.  Amongst them were the Canadian Reformed Churches, the Reformed Churches of New Zealand, and the Free Reformed Churches of South Africa.  The OPC and others have been arguing that suspension of the RCN is necessary to preserve the integrity of the ICRC and its testimony to the world and other churches.  Such a move also sends a clear signal to the RCN and gives them the opportunity to reconsider and repent.  Above all, they argue, this course of action gives the most honour to the head of the Church, Jesus Christ, and the authority of his Word.  Tolerating the present situation is unacceptable.

During the two hour discussion, however, some delegates expressed opposition to the proposal to suspend the RCN.  The Christian Reformed Churches from the Netherlands (not related to the Christian Reformed Church in North America, but rather the sister churches of the Free Reformed Churches of North America) argued that more time was needed and suspension would be premature.  The Presbyterian Church of Eastern Australia also expressed discomfort with the OPC proposal, arguing not only that it was premature, but also that it was necessary to answer the RCN with carefully formulated biblical arguments.

Despite these reservations, there seems to be a consensus at the ICRC that the RCN is indeed out of step with the basis of the ICRC, namely the Scriptures as confessed in the Three Forms of Unity and the Westminster Standards.  There’s therefore no question as to whether the RCN’s membership will be terminated in 2021 should they fail to reverse course on women’s ordination.  The present question is how to move forward at this meeting:  suspend or not.  The Christian Reformed Churches are reportedly preparing a counter-proposal to that of the OPC.

Debate continues on Monday with a vote expected later that day.