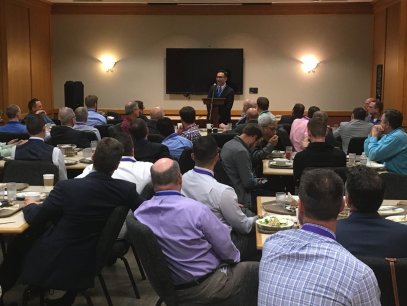 Back in the early 1990s, a unique effort was made to address several  pressing issues facing Reformed and Presbyterian churches.  The issues of concern were primarily egalitarianism (leading to women in ecclesiastical offices) and evolution.  This period saw a mass exodus from the Christian Reformed Church over these very issues and ones related to them.  From concerned CRC and ex-CRC churches, an organization developed which eventually became known as the Alliance of Reformed Churches.  The ARC was approached to convene a series of conferences aimed at developing a confessional approach to the above-mentioned issues of concern.  The hope was that confessional documents could be developed which would provide the basis for doctrinal unity between various Reformed and Presbyterian churches in North America.  The ARC agreed to take this on.

The first Confessional Conference was held in July of 1993.  Christian Renewal reported on it in the September 13, 1993 issue.  Attendance was not all that impressive.  Some of the noteworthy individuals in attendance were Dr. John Byl, Dr. Margaret Helder, and Dr. Nelson Kloosterman.  Attendees came from Orthodox Presbyterian, Christian Reformed (and ex-CRC), PCA, Canadian Reformed, and other churches.  The 1993 meeting reviewed a document prepared by the organizing committee on hermeneutics.  Several speeches were also presented on the subject of creation and evolution.  The intention was that a confessional document on creation would be prepared and presented at the next conference in 1994.

I have been unable to find much about the 1994 conference.  It was scheduled to be held July 13-16.  From this report, it appears that it was held, but the attendance continued to be disappointing.  Another conference was supposed to be held in 1995 to discuss ecclesiology, but because of the attendance issue, it was scrapped.  One never hears about the Confessional Conferences again.

From one perspective, the Confessional Conferences could be regarded as a failure.  However, it was not a waste of time or effort.  Today we still have two important documents that came from these conferences.  These documents should receive more attention.  The first is a Reformed Confession Regarding Hermeneutics.  The second is a Reformed Confession Regarding Creation.  These are both drafts primarily written by the late Dr. Greg Bahnsen of the Orthodox Presbyterian Church.  Both are precise and faithful summaries of biblical teaching on these important issues.  They feature affirmations of the correct teaching and denials of various false teachings.  They are well-worth reading and studying.

Why did the Confessional Conferences fail?  Obviously the attendance was an issue, indicating a general lack of interest in North American Presbyterian and Reformed churches.  Worse yet, there was especially a lack of interest from the membership of the Alliance of Reformed Churches itself — the very organization which agreed to organize these conferences.  Moreover, the ARC was the vehicle engineering the launch of the United Reformed Churches.  That took place in 1996.  Much time and energy was being directed towards establishing a new federation and, understandably, there seems to have been little appetite for a broader outlook on unity.

Could an idea like this be revived today?  For example, could NAPARC be the vehicle to convene a new series of confessional conferences?  We have to be realistic.  I rather doubt that the appetite would be there any more today than it was in the early 1990s.  Just observe that, since then, there have been further developments in various NAPARC churches.  For instance, on the issue of creation and evolution, the URCNA took a position at Synod Escondido 2001.  The RCUS has also taken a firm position, as have others.  While it sounds like a good idea on paper, the reality is that the desire for developing a common confessional approach to these matters is going to be weak.  Churches faced with some of these contemporary theological challenges today are going to be best off investing their time and energy with an “in-house” approach.