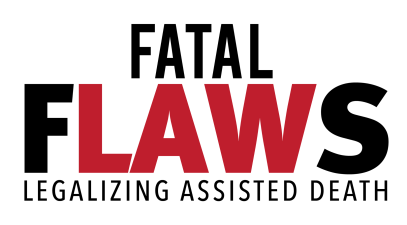 Last year I was invited to an evening with a filmmaker named Kevin Dunn.  He’d made a documentary about euthanasia and assisted suicide.  During the course of the evening, I discovered not only that he’s a fellow Canadian, but he’s even from Hamilton, Ontario — the place I last served as a pastor.  And here he was in far-off Tasmania, presenting his new film.  He spoke and gave some background to the film and also showed us a few clips.  At the time, in 2019, there had already been four attempts to introduce “assisted dying” laws into Tasmania — and all had failed.  However, we were warned that proponents are nothing if not persistent.  Next week, the Legislative Council of Tasmania (the Upper House) will be debating and voting on another bill, this one entitled End-of-Life (Voluntary Assisted Dying) Bill.

One of the pro-life groups I follow on Facebook is Lifechoice Tasmania.  They posted a link last week to the Fatal Flaws film, encouraging folks to watch it.  I posted a comment mentioning that I’d been to the evening with Kevin Dunn in Launceston and was thinking of maybe screening the film for our church.  One thing led to another and, together with Lifechoice Tasmania and ACL we showed the film last night for a max capacity audience.

It’s a powerful documentary.  Kevin Dunn is a story-teller.  Here he uses the power of story to share what’s happened in places like Newfoundland, the Netherlands, Belgium, and the USA (yes, I know Newfoundland is not a country).  He speaks with real people, some of whom were pressured into dying (but didn’t), some who wanted to die (and did), and the families of some who died who had no choice.  Here’s a clip:

Dunn also interviews pro-euthanasia/assisted suicide advocates and presents their side of the story.  Interestingly, even for some of them, places like the Netherlands have gone too far in allowing people to take their own lives for mental suffering or just being tired of life.

If there’s one constant thread running through Fatal Flaws, it’s that there’s always a trend downwards.  Sometimes slippery slope arguments hold little value, but in this instance there is demonstrable proof that once the first step is taken, it all goes down hill from there.  Pro-death advocates are never satisfied — they always want the boundaries to be expanded.  Here in Australia, Lyle Shelton tells the story of Dr. Philip Nitschke in his new book I Kid You Not.  The Northern Territory briefly had euthanasia legislation from 1996-1997.  At a parliamentary inquiry in Tasmania, Nitschke admitted under oath to breaking the law to kill “a socially isolated patient.”  And he was never charged.

I recommend Fatal Flaws to all readers, not just those in Tasmania.  Even if you’re in a country or region that’s already allowing this evil, you can be sure there is or there will be pressure to expand it.  In Canada, for example, there’s Bill C-7 which will permit euthanasia for people with dementia, if that person had previously been approved (more info here).  And on this love affair with death goes…

A final note:  Fatal Flaws is not a Christian documentary.  It doesn’t speak about what the Bible teaches or a Christian worldview perspective on assisted suicide/euthanasia.  Nevertheless, it provides all the needed context to inform a Christian perspective on these matters.

Fatal Flaws can be rented or purchased online here.