Klaas van der Land at his home in Edmonton.

I hated church history in school.  There were reasons for that — one of them was the textbook, another was the teaching style.  One day I came home from school and Opa and Oma were visiting.  Opa asked me about my day.  I told him straight up that it was terrible.  He asked why.  I said, “We had church history.  And I hate church history!”  That was one of the few times I’ve seen Opa blow his top.  There was fire in his eyes as the words shot out, “Vat do you mean you hate church history?  Dat is zo important!”  He reamed me out, but to little effect.  I continued hating church history through my school years.  I didn’t understand until later why Opa got so passionate about this subject.

As mentioned yesterday, my Opa van der Land experienced a momentous event in church history, the Liberation of 1944.  In his small corner of the Netherlands, he was a leader in this event.  Sadly, I didn’t realize that until after having a meaningful conversation with Opa became impossible.  His last few years saw him struggling with worsening dementia and by the time I cared about church history, he couldn’t talk about that, or much else of anything for that matter.

Eventually, some of his personal effects relating to this period came into my possession.  With these items, I can piece together a little bit of the story.  For example, how did Opa come to his Liberated convictions?  There are a couple of clues.  One is a booklet by Dr. Seakle Greijdanus.  It was published on cheap wartime paper in 1944. 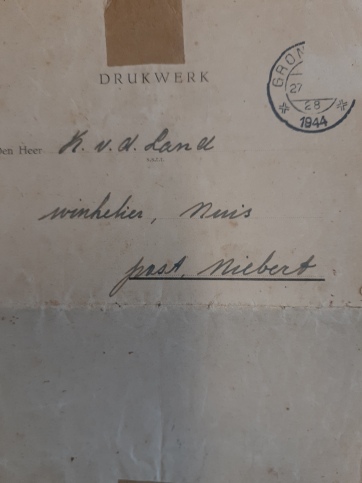 From the postmark, we learn that it was sent to him in 1944, probably from the city of Groningen.  Someone peeled off the stamp, so we don’t have the full name of the place of origin, nor the full date.  It was sent to Klaas van der Land the store keeper in Nuis via the post office in Niebert (a village next to Nuis).  But who sent it and the background behind its sending is a mystery.

The pamphlet itself was written by Greijdanus, a close colleague of Klaas Schilder at the seminary in Kampen.  The title comes from Acts 7:1,2 “Are then these things so?  And he said….listen now.”  However, it’s not an exposition of Acts 7:1,2 but an explanation of the events surrounding the suspension of Klaas Schilder and what happened with the autocratic synods.  I would imagine that this pamphlet was influential in my Opa’s thinking about these things.

There were also two local ministers who appear in the documents I have.  As I mentioned yesterday, Marum’s pastor was underground hiding from the Nazis and so out of the picture.  He wasn’t supportive of the Liberation anyway.  However, to the north of Marum was the village of Kornhorn.  Rev. E.H. Woldring had been serving there since 1922.  It was his first congregation.  By 1945, he was 61 years old — a veteran pastor who followed the Liberation.  Some 20 km to the northeast of Marum was Rev. H. Bouma in Niezijl.  Niezijl was his first congregation and he was just 28 years old in 1945.  He too became Liberated.  He would later author a book translated into English as Secession, Doleantie and Union: 1834-1892.  The veteran pastor Woldring and the greenhorn pastor Bouma supported my Opa and the other Liberated believers in Marum.  After the Liberation happened, Woldring and Bouma took turns leading the worship services for them.  I’m inclined to think that these pastors probably had something to do with shaping my Opa’s convictions as well.  Especially with the absence of Marum’s pastor, it’s quite conceivable that Woldring and Bouma occasionally led the services in the church there before the Liberation — and that’s likely where the connection was forged.