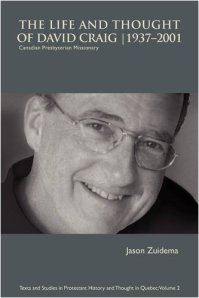 David Craig (1937-2001) was an instrumental figure in the early days of L’église réformée du Québec (Reformed Church of Quebec).  While I had some contact with him as a seminary student, I regrettably never had the opportunity to meet him in person.  Over my summer vacation, I read the recent biography by Jason Zuidema and came to appreciate the measure of the man and what the Lord did through him in Quebec and elsewhere.  It’s definitely worth a read.  Let me share one paragraph in particular that resonated with me:

David was particularly concerned about imparting to his young church members the idea that the ‘Reformed’ Church was not an aberration, but a faithful continuation of God’s Church.  It was a faithful form of a real catholic church in opposition to the Roman Catholic Church predominant in Quebec.  David did not want his church to be simply called the Église Réformée,  but the “Église Catholique Réformée” to emphasize this continuity with the good tradition of Catholicism before the Reformation.  In a certain sense, one could argue that David thought the Roman Catholic Church appropriated and perverted the word ‘Catholic’ to refer only to itself.  Many of David’s colleagues appreciated this concern, but found the word ‘Catholic’ too loaded to use in official signs and documents.  In any case, David’s concern was to highlight that a Reformed church was not simply a foreign imposition, but in the good tradition of Quebec.  He always wanted the French speakers to make the Reformed church their own.  (84).

I entirely share those sentiments and have often expressed them.  It reminds me of a Canadian Reformed minister who, when his church built a new building, proposed that they adopt a new name, “The Catholic Church of Town X.”  He didn’t find too many supporters.  On a more serious note, this is also a good reminder to abandon the practice of referring to the Catholic Church or Catholics, when what we mean is “the Roman Catholic Church” or “Roman Catholics.”  They have no right to the name and we should stop ceding it to them.

Pastor of the Free Reformed Church, Launceston, Tasmania. END_OF_DOCUMENT_TOKEN_TO_BE_REPLACED
This entry was posted on Monday, August 11th, 2014 at 8:25 pm and tagged with catholicity, David Craig, Eglise Reformee du Quebec and posted in Church History, Ecclesiology. You can follow any responses to this entry through the RSS 2.0 feed.
« Advice of Dr. J. Van Bruggen to Synod Ede 2014 on Women in Office
Reaching the Unchurched »