The Synopsis of Polanus’ Syntagma (3) 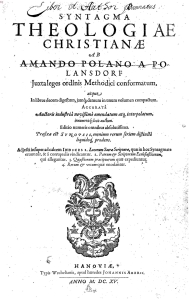 Syntagma Theologiae Christianae is the title of this work by Amandus Polanus.  The word “Syntagma” is the clue to the character of this work.  It’s an unusual word that one doesn’t encounter often in theology.  It comes from classical Greek and is typically used to describe an orderly arrangement of soldiers.  When I was in the Royal Canadian Air Cadets many years  ago, I learned about military structure.  In the Air Command of the Canadian Forces, it begins with a flight, then a squadron, up to a wing, and then several wings make up a division.  It’s all neat and orderly.  This is the thought behind Polanus’ Syntagma — a neat and orderly arrangement of Christian doctrine.

We’ve come to Book II in the synopsis.  This is where Polanus begins dealing with theology proper or the doctrine of God.

The doctrine of faith consists of two parts:  the first concerns God, the second concerns the Church.

The doctrine of faith concerning God is of two parts:  the first concerns the essence of God, the second concerns his works.

The doctrine of faith concerning the essence of God is of two parts:  the first concerns the attributes of God, the second concerns the Divine persons.

First, the divine attributes are either considered positively or negatively.

Second, either properly or figuratively.

The distribution of the proper attributes of God are especially two.

The first is with regards to the divine names, then regarding the essential properties of God.

The divine names are found in both the Old and the New Testaments.

Of those which are in the Old Testament, some signify the essence of God, others his unique (propria) essence.

The names designating the essence of God are:  Jehovah, Jah, Jae

Found most frequently in the New Testament are:  Theos and Kurios.

These also occur in the New Testament :  the Most High, Father, Father of Lights, Abba, Lord of Hosts.

The essential properties of God are two-fold in order:  some are primary, others are secondary.

The primary essential properties of God are in order:  simplicity and perfection, and then infinity and immutability.

The infinity of God is then considered with regards to eternity, and then immensity.

The immutability of God is then regarded in essence:  the nature of its essential properities, and then the decrees and promises of God.

The secondary essential properties of God are in order:  life and immortality; blessedness and glory.

The blessedness of God consists of:  exemption from all evil, and the possession of all good.

The good which the blessed God has is infinite and incomprehensible.   It is good for us to remember what these attributes entail:  wisdom, will, power, and freedom.

The essential wisdom of God consists of:  intelligence, knowledge, skill, and prudence.

First, the knowledge of God is either general or special.

Foreknowledge is two-fold:  universal and particular.

Moreover, the foreknowledge of God is either theoretical or practical.

Third, the knowledge of God is either in seeing (visionis) or in simple intelligence.

Again, if you’re reading this and have suggestions for improving my translation, please let me know.   Thanks!

Pastor of the Free Reformed Church, Launceston, Tasmania. END_OF_DOCUMENT_TOKEN_TO_BE_REPLACED
This entry was posted on Thursday, December 24th, 2009 at 1:19 pm and tagged with Amandus Polanus and posted in Historical Theology. You can follow any responses to this entry through the RSS 2.0 feed.
« The Synopsis of Polanus’ Syntagma (2)
Christmas and Mission »